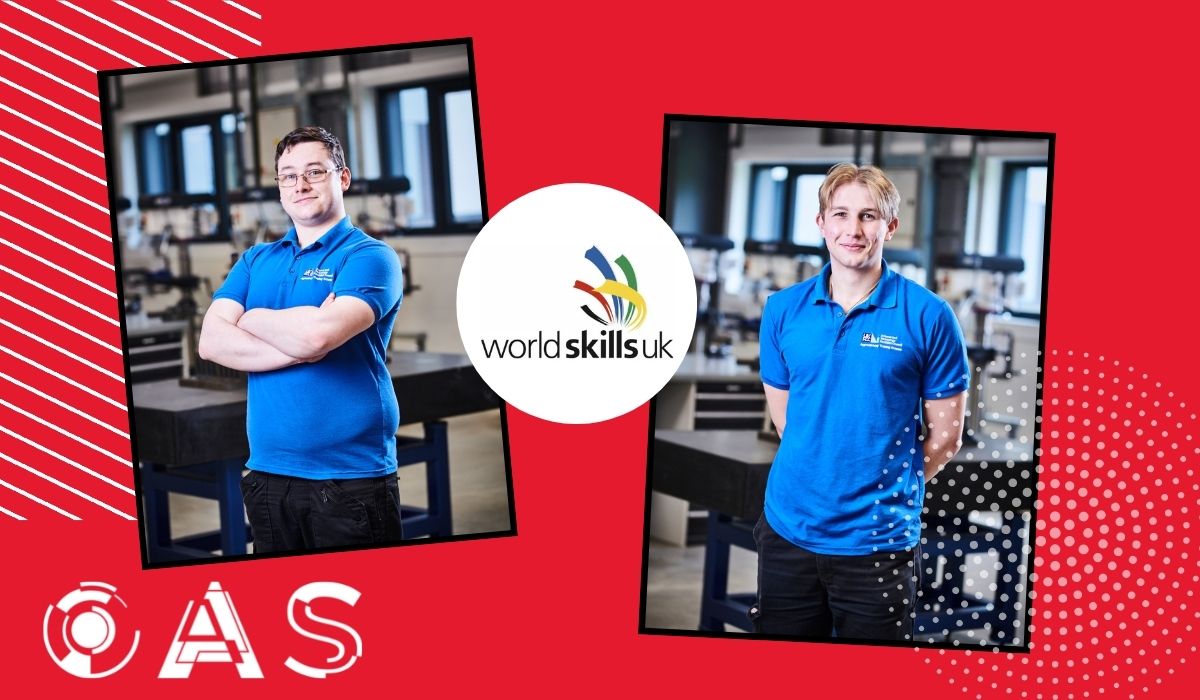 Four MTC Training apprentices will put their advanced manufacturing skills to the test in the last stage of the UK WorldSkills competition in November!

Two learners from Oxfordshire Advanced Skills (OAS) and two from the Advanced Manufacturing Training Centre (AMTC) beat stiff competition from across the country to qualify for the national finals. Second year apprentices Darren Mitchard and Tony Yarinakis from the Science and Technology Facilities Council (STFC) will compete in the CNC Milling final, while Jack Leonard and Omar Awaad, first year apprentices at FANUC UK Ltd and Regent Engineers Leicester, are finalists in the Industrial Robotics competition.

The aspiring technicians battled it out against other current and recently qualified level 3 apprentices and students across two competition stages. Working in teams of two, entrants completed tasks designed to test their technical and professional skills under pressure, with the top scorers progressing to November’s National Finals in Blackpool and Coventry.

Darren Mitchard, who completes his off-the-job training at the provider’s Abingdon-based training centre, OAS, and was entered into the competition by his employer STFC, said the experience had already been a brilliant opportunity so early in his engineering career.

“It’s been a very steep learning curve because CNC wasn’t on my radar before, but I’ve really enjoyed it! Reaching the finals is a very memorable achievement already and we’re working hard to further our skills before the next stage of the competition.”

One of the youngest apprentice’s at MTC Training’s Coventry site, the AMTC, Jack Leonard said he was thrilled to have made it to the latest stage of the competition.

“I’d never even heard of WorldSkills before my apprenticeship, but it sounded interesting so I formed a team with someone I’d never met before, and now we’re finalists! I’d love to win and to have the chance to represent the UK in the world competition, and perhaps to help teach and mentor other young UK competitors to succeed in the future.”

All four learners are completing the Level 3 Engineering Technician Apprenticeship Standard delivered by training provider MTC Training, which is part of the Manufacturing Technology Centre (MTC), a member of the High Value Manufacturing Catapult network.

MTC Training’s managing director, David Grailey, said he was delighted that both training centres would be represented in the final stage of the national contest. “The standards in this competition are very high and the apprentices’ achievement really demonstrates their fantastic determination, commitment and progress so early in their engineering careers.

“Our mission is to upskill the next generation of talent with the expertise UK advanced manufacturing businesses need now and in the future. Robotics and CNC are two crucial areas for the sector, so this is a brilliant achievement which will benefit both our learners and their employers. It’s also great recognition for our training teams and the employers who have supported these apprentices to achieve so much already.”

The finalists will now prepare and practise in their training centres and workplaces for the last leg of the UK competition. Competitors who achieve a benchmark score at the finals will be invited to opt into Squad UK during December 2022 for the WorldSkills Lyon 2024 cycle.

Find out more about Jack, Omar and Darren at the links below: