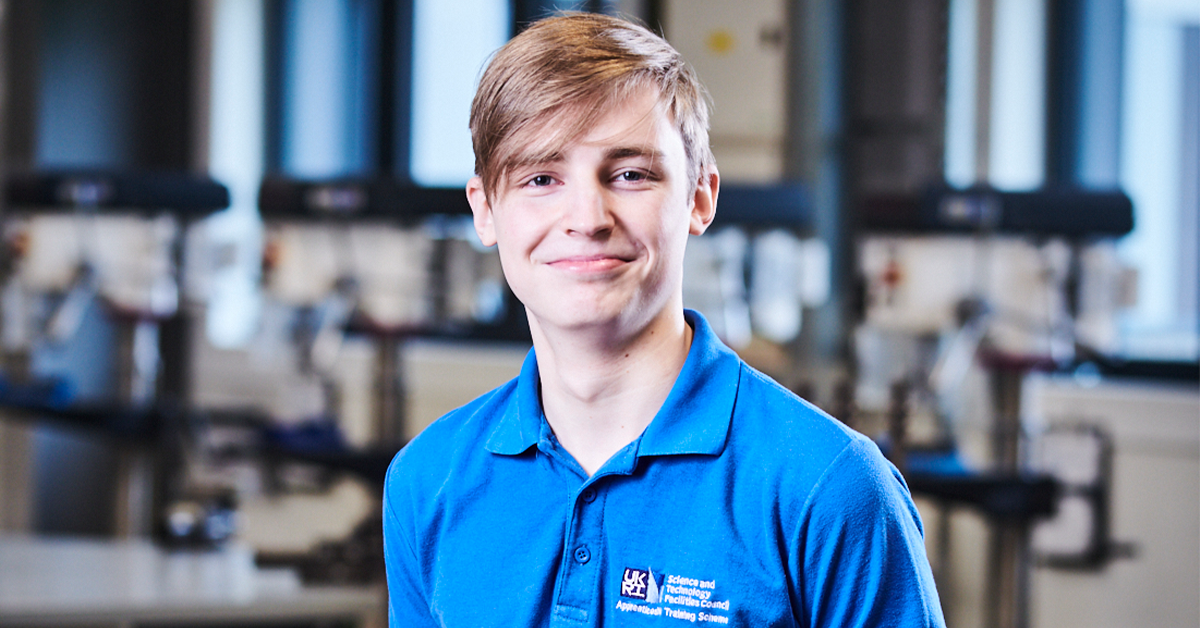 After dreaming of becoming an inventor when he was younger, Max naturally followed an engineering pathway and is currently an Apprentice Electronics Engineer at the Science and Technology Facilities Council (STFC) in Oxford. We talked to him about why he’d love to work in Space, what distinguishes an apprentice from an academic graduate, and the small matter of making a light sabre!

I’d already completed a Level 3 BTEC, so I was at a crossroads – I could pursue FE or go for an apprenticeship. I wasn’t keen on getting into debt, and I’d also done a lot of work experience placements. All the employers were saying that they were looking for people with hands on work experience, not someone straight from university. That was the decider for me, so I applied to STFC and began my apprenticeship at OAS.

Did you have a particular career in mind when you made your decision? If so, what and why?

My ultimate goal is to work in Space – I find it fascinating, being the ‘final frontier’. I would love to go into space myself, but it would be incredible just to be part of an aerospace project. I hope to work with the space team at STFC on one of my placements in the next few years, and I’m already really looking forward to it.

Were you always interested in a career in engineering?

Yes, although I haven’t always thought of it as engineering – if you’d asked me when I was younger, I would have said that I wanted to be an inventor. I’m fairly close to that description now, and having done a Level 2 and a Level 3 BTEC in engineering already, my path has been set for a while! It’s the problem solving part that I enjoy the most, I find it so satisfying to complete something and for it to be whole and complete.

Did you have an idea of what an apprenticeship would involve before you came to OAS?

I had friends that had done apprenticeships in the past, and I was lucky that my school was also very supportive of pursing an apprenticeship path, so I had a pretty clear idea of what to expect. There haven’t been any surprises yet!

What are the most memorable projects you’ve worked on at OAS so far?

I’d never done any machining before I started my apprenticeship, and now I’ve learned to mill and lathe. I’m actually looking at getting my own lathe at home so I can make my own projects. We finished our turning module really quickly, so we had the opportunity to work on some extra projects of our own to push our skills a bit further. I made a lightsaber and some titanium rings – the lightsaber is my biggest achievement so far I think, and I gave my mum one of the rings for Christmas! I enjoyed having an opportunity to be more creative, and I’ve done a whole load of other CAD drawings ready to make one day in the future.

How has the apprenticeship programme been beneficial to you and your career?

It’s already gained me recognition with my manager at STFC because I won Apprentice of the Month, which was great! Because I’ve got a bit more experience than a lot of the other apprentices, I’ve also been developing my leadership skills through group work. It’s been great to be able to help out apprentices in my teams.

What would you say are the benefits and what advice would you offer to those looking to apply to the OAS apprenticeship programme?

I haven’t had a single bad trainer – all of the OAS trainers are knowledgeable, good at what we do, and willing to help the groups to achieve their aims. If you’re thinking about applying to the OAS programme, I’d definitely say do it!

The people – everyone’s really nice and has worked really hard to get to where we are. Being around other apprentices who are interested in similar things and working towards our shared goals brings everyone together.

As I said, I’m aiming for STFC’s Space team, but I’ll be working through all sorts of placements in different areas of the business during the rest of my apprenticeship so I might discover something even better along the way. Ultimately, I’d like to be well-recognised in my field, whatever that ends up being.

Yes – there’s less debt than uni for a start, but also the work experience is so valuable. For me, an apprenticeship is the difference between knowing how to do something and actually being able to do it… which is fairly important in engineering!